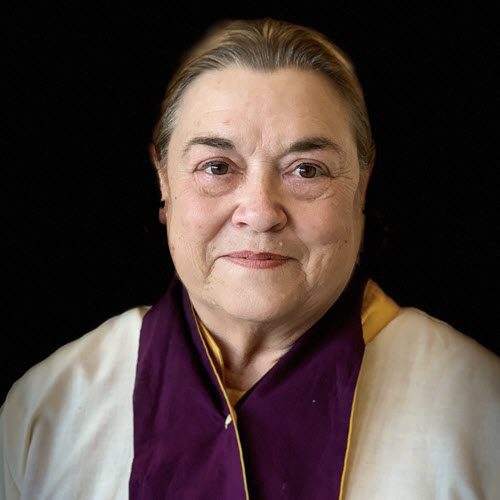 Reverend Dhyani Simonini, a Yogaville resident and retired Buckingham High teacher, was ordained in 1990. She has served as a four-term president of the YCA, a county Red Cross Disaster Team leader, a mediation trainer, and a delegate of the Clan Mother of the Eastern Lenape Nation to establish a Turtle Island Chautauqua (Peace Center) and Medicine Wheel.

Reverend Dhyani is currently on the Integral Yoga Ministry Board where she has served for many years. She is a longtime devotee of Sri Gurudev who became involved in the Yogaville Ashram when it transferred to Virginia in 1980. As a high school English/Drama/Creative writing teacher, she mentored the Ashram teenagers both in class and in the Buckingham Touring Company, where the talented teens played major roles onstage and backstage. Sri Gurudev gave her a personal invitation to move to Yogaville and later initiated her into householder sanyas,saying,”Don’t change your dress or address. Just serve.”

The three areas closest to Dhyani’s heart are service to young people, the community at large, and to the indigenous people. She was ordained as a minister in 1990 and, the same summer, was made a member of the Eastern Lenape Nation of Pennsylvania by the nation’s clan mother, Doris Riverbird Woman, who also authorized her to conduct a Medicine Wheel and to create a chautauqua in the name of the People. This resulted in her hosting Wallace Black Elk, who gave her her native name “Blue Star” and directed her to help “Mend the hoop.” She also served the Tsalagi (Cherokee) people at
the request of the Sacred Firekeeper, Walker Calhoun, in transcribing all the sacred songs into International Phonetics for archival preservation.

Back home, Dhyani served the larger community as Disaster Action Team (DAT)captain for the Red Cross for 8 years, directed a drama group in the Buckingham Prison, wrote grants to save an empty school to have it become the Buckingham Arts Center, and continued to teach and tour productions to underserved audiences. Her Youthful Theatre Company was invited to tour Russia by the Soviet/American Dialogue Foundation, a crowning achievement for the group. Currently, Dhyani is transcribing the Lenape spiritual teachings as given to her by Grandmother Doris on the Medicine Wheel and serving on the Ministry Board.