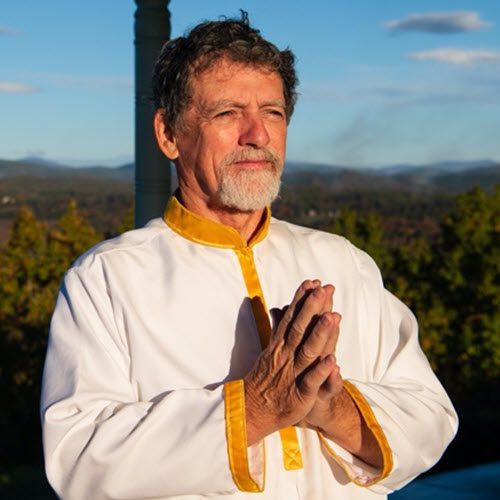 Surya was born in Victoria British Columbia, Canada. His father was in the military, so he travelled extensively. At a young age he began to wonder why we are here, developed a thirst for God became a choir boy. He wore many hats during his life including as a soldier, a factory administrator, a rock guitarist, an industrial engineer, a purchasing agent, a co-op housing project coordinator, a hockey referee and now an insurance agent.

In 1973 he took his first Integral Yoga class and felt he had finally come home. He took TT in 1974 and met the holiness that he had sought since childhood in Sri Swami Satchidananda. He and his family moved into the Montreal IYI in 1977 and opened an Integral Yoga Teaching Center in Toronto a few years later. He was ordained in 1980, moved to Yogaville in 1988 and in 1997 opened a Yoga and Healing center in Charlottesville where he led Teacher Trainings, was a Massage and Shiatsu Therapist and healer. For fun Rev Surya plays golf, hockey, guitar and tablas. Rev Surya works in retirement income in fixed index annuities and volunteers at the ashram as a pujari and serves on both the Spiritual Life Board and Board of trustees! Surya is also the Chaplain for the Virginia Chapter of Team America, a nationwide constitutional group. Surya believes that love is the most important yogic trait and should be the core of all decisions and actions. He teaches Hatha I and II, does spiritual counseling, and lectures on various yogic topics. He is available for pujas, vows of intent, weddings, memorial services, baby and house blessings.